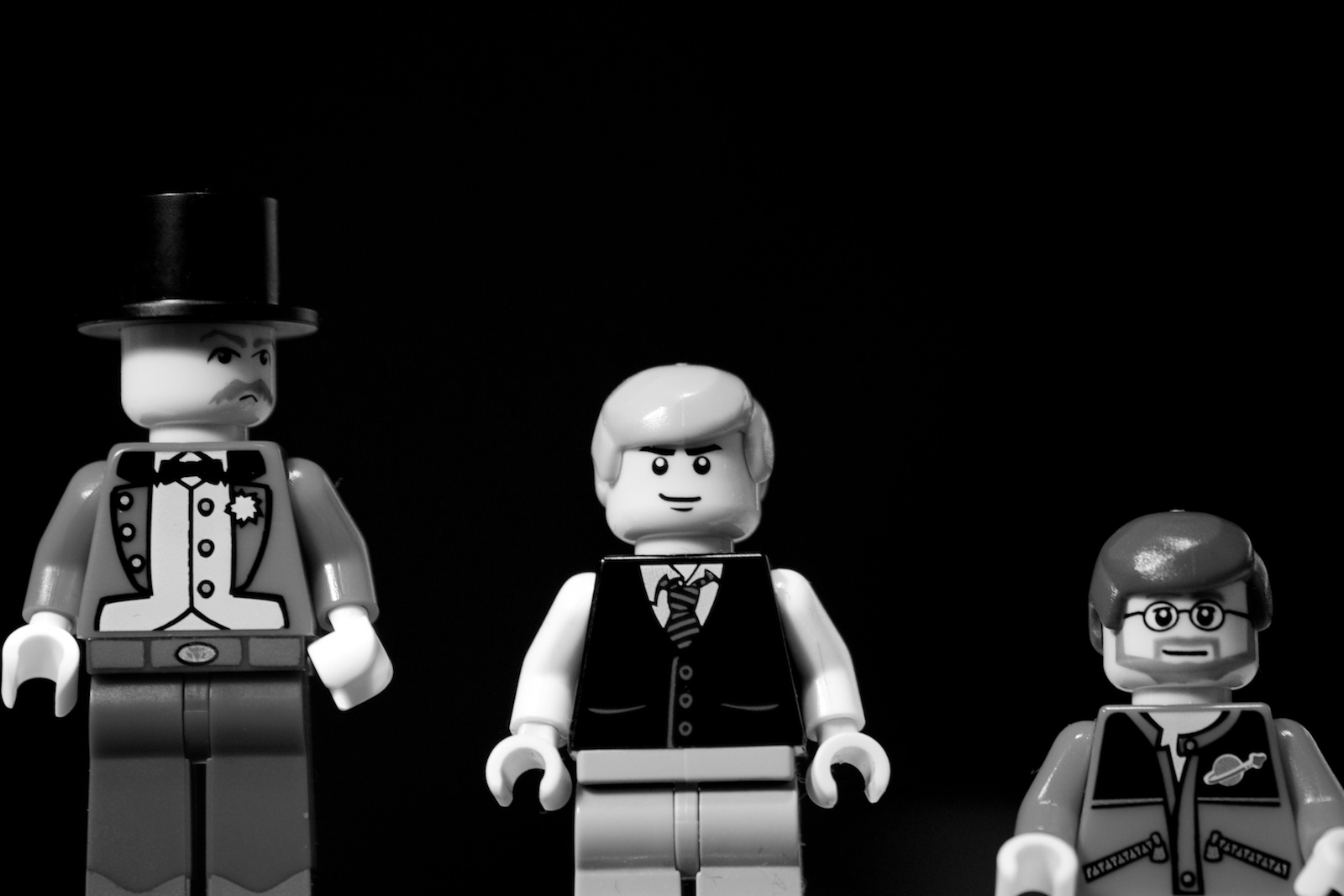 So you've read our article on how to start building LEGO and want to connect with other like minded folks? Did a Google search but got a bit overwhelmed? I felt the same when I first wanted to join the community.

LEGO fans come in many shapes and sizes, and our community reflect that. This article points you to key resources in the AFOL community. AFOL stands for Adult Fan of LEGO. The discussions happen in a lot of places. By joining it you'll likely make friends, become a better builder and collector, and have a whole bunch of fun. A small caveat though: you probably need to be about 15+ to fully enjoy most of these resources.

This list is by no means comprehensive, but the sites are all alive and kicking. LEGO sites have a tendency to come and go, but most of these have a proven track record of a few years. Read on to crawl down the LEGO community rabbit hole. But first, let's give you a small history of how we got to where we are today! Skip ahead if you're not interested in my attempt at storytelling and want to get the links.

A brief and slightly dramatized history of AFOL communities

Once upon a time the Adult LEGO community was small and just. We hung out at LUGNET, where we discussed pictures hosted on Brickshelf. This was the way it had been done since we discovered each other on the 'net, and surely the way it would always be done. Everyone danced on green plains and talked with sugarcoated words.

But, trouble brewed. The community grew slightly larger. LUGNET couldn't keep up: it was clunky and horrible to use, the king and queen had deserted their people, and the plains withered soon after. So the community deserted the once green land, building niche forums of their own. It was the time of the great Exodus, and it left LUGNET dry. A few loyalists shouted in the dark before they, too, left. (Legend has it some people still visit the ancient site, but it's probably just the ghosts of the past whispering about grand days of yore.)

Anyway, people where happy for a while. They talked in these new niche forums about their niche images that they still hosted on Brickshelf. There even sprung up a service to complement Brickshelf - MOCPages - where you could create a presentation for your images and get comments on them. Pretty neat.

But trouble brewed again. The community grew even larger. New people joined, and they had shorter attention spans and weren't willing to put up with clunky interfaces. And to be honest, neither wanted the old AFOLs. They all began to make demands of Brickshelf. "Make it easier to upload stuff!" they cried. Kargador Lochley, who ran the image hosting site, didn't want to. "You guys should be happy that I even do this!" he said. "Look, now I take it down for a few days so you'll see how bad it is without!" he said.

The community was terrified and didn't know what to do. But when all seemed lost, a small scouting party came back with golden tales about a new, promised land called Flickr. So everyone left and hasn't looked back since. Now they don't have to put up with crazy demands from Kargador or clunky interfaces. And all is well... for now.

Flickr is the only one that isn't LEGO exclusive, but despite that it's probably the largest. Mocpages often attracts a younger audience and Brickshelf is but a shell of what it once was. All do see some action, however, so it's not a bad idea to explore all of them and see if you prefer one or the other.

Many feel flickr isn't the optimal tool, especially since the application has had an identity crisis of late. A few alternatives have been created. Bricksafe is probably the most prominent among them, but so far none has managed to attract the majority of the community away from flickr.

When it comes to general meeting places Eurobricks is probably the largest one there is. Brickset, with its strong user base, also has a lively party in its forum.

Social media has otherwise absorbed a lot of discussion. Groups on flickr are very common, with the one named LEGO acting as a central gathering spot. There is also LEGO fans on Facebook, and /r/lego on reddit is teeming with life. bricks.stackexchange provides an ask/answer site. Since the other sites in the network are pretty technical it's mostly filled with questions on how to program NXT.

From Bricks To Bothans is the gathering point for LEGO Star Wars fans out there. Many other space and sci-fi gathering points have been absorbed by flickr, but FBTB stands strong. Similarly, Classic Castle is still well visited by people who have an interest in LEGO castle and other things medieval.

A lot of niched discussion is also happening in groups on flickr. To find LEGO groups there, BrickBuildr's flickr group list is a very good start.

Many LEGO User Groups - shortened LUGs - have virtual gathering points in addition to their physical presence. Have a look at our LEGO location list and map to see if something is close to you. We have gathered more than 100 LUGs from all over the world for your perusal. Our event map is probably the best resource on the web for finding LEGO events to visit in person.

Other hubs and resources

For building techniques and discussion, Swooshable (this site, yay!) is probably the best place to go. Some discussion can be found in Flickr's technique pool, but it's not a huge amount. The submitted photos are great however.

Moc Recipes is an excellent site to check out for its interesting technique articles. Brickup is a german site which has collected a number of techniques, not unlike what we do here at Swooshable.

There are many LEGO Blogs out there. The largest and most active one is probably The Brother's Brick. It focus on highlighting spectacular builds from the community along with the occasional set review or tutorial. The writers tend to be deeply involved in the community, friendly and bright people. Three other regularly updated blogs with excellent content is The New Elementary, The Brick Blogger and Brick Nerd. For more, check out the blogrolls of these four sites.

The LEGO community also has their own magazines to check out. The past few years Bricks Magazine and Brick Culture has really set the bar with great content - techniques, interviews and other in-depth material. Both are bought from the publisher, Republic66. An alternative that I haven't personally read is Blocks Magazine. With luck you'll find any of them in a magazine store near you. The older Brickjournal and Hispabrick Magazine are also worth checking out. You can even download a lot of issues as PDFs.

If you're looking for inspiration in your inbox, Breaking Brick is a newsletter by the one and only Matthew Kay. It is sent roughly once a week, and contains curated happenings, builds, set nostalgia and other LEGO related subjects. Anything is fair game. Besides this, many of the larger sites have newsletters relating to their particular subject matters.

A gap in the community is audio. To my knowledge there is only one active LEGO podcast - All Sorted by Breaking Dads. Jeff and James have pleasant voices and tackle a variety of LEGO related topics in a fun way. Definitely worth a listen. LAMLRadio was an early contender on the scene, but stopped producing episodes in 2012. The archive is till available.

Considering LEGO is a visual medium it's no surprise that there are many YouTube channels. Beyond the Brick aims to document the AFOL scene in the US by spotlighting builders and their creations. Nick Trotta, aka Galactic Plastics, is an incredibly talented builder who showcases his models and does build videos for them. Very entertaining and educational.

When it comes to buying and selling LEGO Bricklink has long been the reigning champion. It is a shared marketplace where anyone can open a store and sell pieces. The site is a bit dated, which has led to competitors like Brick Owl to arrive on the scene. Both are good, active places to buy and sell bricks. A lot of trading also takes place in the "usual" channels, such as E-bay, Amazon and other local marketplaces.

Finally, for tracking your inventory Brickset is a good place to go. Log in, register your sets and revel in your data. You can even pair it up with Rebrickable to see what other sets your current collection allows you to build. Brickpicker indexes a lot of marketplaces and calculates the average set price, which can be interesting if you're looking to buy or sell a particular set.

A big thank you goes out to everyone who use and create these resources. You are what makes the LEGO community great. A big shoutout goes to Paul Hudson for the header photo.

Steve and John did their job every day, yet they never stopped to consider that their tools might be too small for the task. After all: everything is cool when you're part of a team.

It's a pretty standard site search, but I'm trying to make it smarter day by day. You can currently search for techniques, parts, sets and contributors. If you can't find what you're looking for contact me and I'll try to help you along and make this better.

Some things to try